Iron ore, a barometer for the Chinese economy and driver of the Australian dollar, is probably having its wildest year ever. Prices jumped to a record above $230 a ton in May, crashed to about $85 in November on a government pledge to reduce steel output, and have now rallied 50% in just six weeks.

The volatility is set to persist into 2022 as a rebound in steel production this month falters early next year, with the usual seasonal output constraints tightening in the run-up to the Winter Olympics in February. Beyond that, strong headwinds are building: China is pushing ahead with cutting carbon emissions, steel output is expected to shrink for a second year, while a debt-laden property sector is weighing on steel consumption and broader growth.

The country buys about 70% of the world’s seaborne iron ore and is set to produce 1.03 billion tons of steel this year, more than half of global supply. 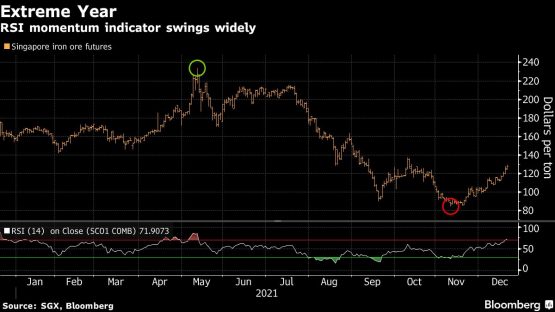 In terms of what this all means for prices, UBS Group AG expects iron ore to average $85 a ton in 2022, while Citigroup Inc. sees $96. Capital Economics Ltd. predicts $70 by the end of next year. Futures in Singapore have averaged $157 so far in 2021, and traded around $128 on Wednesday, up for a fifth day.

Among bright spots are potential fiscal stimulus in China, possible further easing in monetary policy, and more support for the property industry, while steel output could rebound when limits are removed after the Winter Olympics. The view at Macquarie Group Ltd. is that iron ore could spike in the first half of next year because current steel production levels in China look “unsustainably low.” Output in November slumped to the smallest for the month since 2017.

Still, there are a “lot of uncertainties,” said Tomas Gutierrez, an analyst at Kallanish Commodities Ltd., who expects prices to trend below $100 next year. The global growth outlook is mixed, while there could be inflationary pressures from energy prices and supply disruptions. The omicron variant of the coronavirus, now detected in the country, is also a “dangerous variable considering China’s zero-tolerance approach to Covid,” he said from Shanghai.

For the major mining companies, lower prices mean “reduced –but still fairly large — margins,” said Gutierrez. Smaller miners may need to consolidate, and projects that have resumed at high iron ore prices will probably have to close, adding to a number of shuttered projects this year. Mining costs can be as low as $15 for a ton of iron ore, compared with prices now of well over $100.

Still, shares of some major mining companies have lost their shine this year. Rio Tinto Group and Fortescue Metals Group Ltd. are heading for annual losses of more than 10% in Sydney trading, representing in Rio’s case the first decline since 2015. BHP Group is also currently in negative territory for the year.

Australian miners could face higher costs and lower product prices next year, UBS analysts including Lachlan Shaw said in a note. The bank has a sell rating on Rio and Fortescue Metals, and a neutral rating on BHP.

Global iron ore shipments in 2022 will more or less hold steady from this year, according to dry bulk tracker DBX Commodities. There is not much spare capacity in Australia, while Brazil might see a rise in volumes as Vale SA attempts to ramp up operations, and India will see a drop in exports.

Healthcare Companies: Here’s How the Competition is Stealing Your Patients