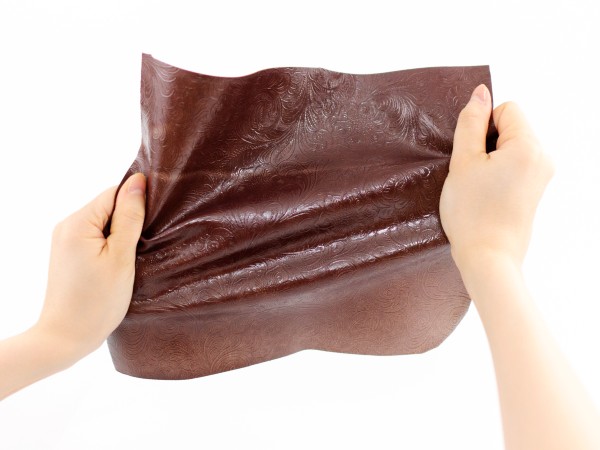 Consumers are increasingly putting a greater focus on the sustainability of the products they buy; to wit, a 2021 survey found that over four in five consumers say it’s important for brands to focus on operating sustainably, while two in five say its “very important.”

Even products that we think of as being environmentally friendly sometimes aren’t, though. Take synthetic leather, for example; while making real leather uses a lot of water, and tends to involve toxic tanning processes, including dyes and heavy metal chemistry, so-called “vegan leather” is often no more environmentally friendly than the real thing.

“Vegan leather usually just means a plastic film that’s been decorated in a way to look like leather, to the point where there’s some EU countries that are talking about even banning the term vegan leather because it’s basically misrepresenting what the product is,” said Ross McBee, co-founder and Chief Scientific Officer at TômTex, a startup that uses biobased material to create a sustainable leather alternative.

“It’s still a petrochemical product, it still produces microplastics, and it’s still not very good for the environment when a more broader accounting is made.”

TômTex’s material is made out of natural materials, namely shell seafood or mushroom waste (tôm means “shrimp” in Vietnamese), using a molecule called chitosan, in order to create a product that looks and feels like leather but which is less harmful to the environment, while also being biodegradable.

Now the company has some new funding to help bring that product to market, announcing a $1.7 million pre-seed round on Thursday, led by SOSV, along with Nucleus Adventures Capital, C3 Ventures, CRCM Ventures, Gaingels, Portfolia and Chasing Rainbow.

The reason why TômTex uses chitosan is how common it is in nature; as McBee explained, it’s the second most common biopolymer in nature, behind only cellulose, which is what cotton and wood are made of. Chitosan is in the exoskeletons of all arthropods, so marine arthropods like shrimp and crabs and lobsters, but also insects, as well as the cell walls of fungi.

“This is a very common and highly functional molecule, which basically doesn’t see very much industrial use. It’s used in some cosmetics applications, it’s used as a supplement occasionally, it’s used in developing wastewater treatment technologies is a flocculant, but it doesn’t occur in nature as a fiber, so it hasn’t really seen a whole lot of use as a textile material,” said McBee.

It’s also often discarded either dumped into a landfill where they degrade into methane, or dumped back into the ocean, where they cause nitrogen balloons. and stuff like this. On top of that, chitosan can be worked with in water or ethanol, unlike other fibers which need to use harsh chemistry, meaning the company reduces the potential environmental harm while creating the material.

While the molecule can be used to make a number of different types of products, such as films and plastics, the company chose to focus on making synthetic leather due to the size of the market, which is $400 billion globally.

“We see both an ethical obligation and also market opportunity here to come into this space and build out a series of materials that are high performance, that have great aesthetics, but that are derived from waste streams in sustainable ways, to really live up to the promise of these materials and allow people to engage with an aesthetic that they really love,” explained McBee.

“I mean, leather’s basically as old as humanity; it has a very rich history, and we want to continue that in a way that is responsible and sustainable and looks towards the future.”

While TômTex’s leather is not yet on the market, the company is in the process of developing partnerships with large brands in the space, as well as with designers in New York City, where the company is headquartered. The company plans to use the new funding to help that process along, with the hopes of having exclusive one offs and runs in the next year or two.

It also plans to expand beyond its initial category of luxury leather goods, including apparel and accessories, to having the material used in other industries, such as consumer electronics and automotive. In consumer electronics, for example, there are many headphones and sound systems and things like that in luxury consumer electronics that have paneling, which use leather. In the automotive space, it could be used in paneling and dashboards and inlay.

The funding will also be used for growing out its team, which currently consists of the company’s three founders: McBee, CEO Uyen Tran, and COO Atom Nguyen. The plan is to bring on new members on the business development side, as well as on the technical side, while also hiring a senior scientist and somebody on the communications marketing side.

Overall, TômTex’s goal is to help reimagine the relationship people have with the material world by echoing what happens in nature, where the the concept of waste doesn’t exist.

“There are very few dead end products in natural systems, which is a fairly striking contrast to how humans relate to the material world. Particularly in the West, we tend to generate a whole lot of waste, and then either just bury it or sometimes even worse, shovel it off on somebody else that has to deal with it, it ceases to be our problem because it’s out of our mind’s eye,” said McBee.

“It’s become quite clear, as we move forward into the climate crisis, that this is not a sustainable way of relating to the natural world, that we really have to do something about the way we relate to materials, the way we think about materials, the way materials are actually built and used. So, we’re seeking inspiration from the natural world and trying to build materials in a similar way.”

Tap into Your Inner Kid with This Robot Building Kit