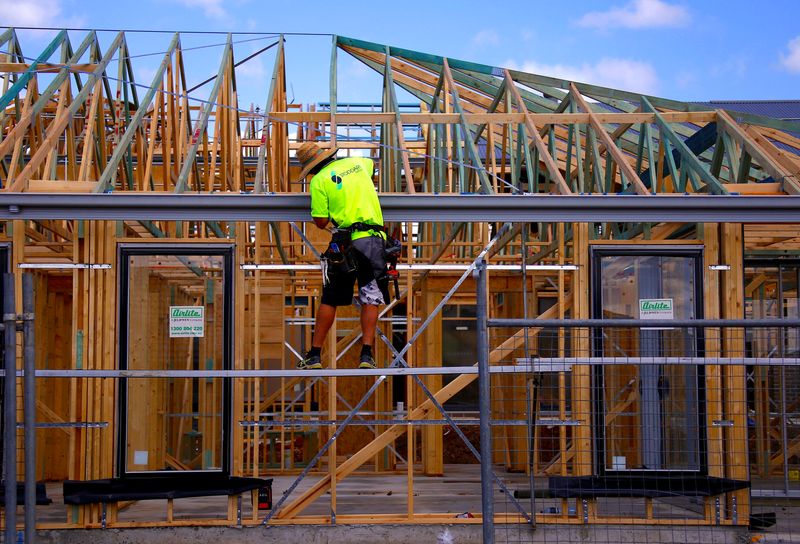 © Reuters. FILE PHOTO: A tradesman works on the roof of a house under construction at a housing development located in the western Sydney suburb of Oran Park in Australia, October 21, 2017. Picture taken October 21, 2017. REUTERS/David Gray

BENGALURU (Reuters) – Australian housing prices that are on a steep decline will likely fall further next year, according to a Reuters poll of analysts who forecast a peak-to-trough slump of 16%, more than double the correction during the 2008 financial crisis.

Near-zero interest rates and a dearth of housing supply pushed home values across Australia up 25% during the pandemic, increasing homeowners’ wealth, but that has kept many first-time buyers off the property ladder.

However, the Reserve Bank of Australia (RBA) has lifted interest rates by 275 basis points this year to a nine-year high of 2.85% and is expected to add another quarter-point in December. Markets are pricing it to reach 4.00% by end-June.

That has hit home prices, pressuring the RBA to downshift to smaller rate hikes, as it is worried that aggressive tightening would sharply curtail household spending in an economy where a lot of wealth is tied up in housing.

Australian house prices have nearly doubled since the financial crisis but that boom has led to a build-up of household debt that could become a risk to financial stability.

Although average house prices have fallen 6.5% since a peak late last year, with losses spreading to every state capital, they are still well above pre-pandemic levels.

“We expect a peak to trough housing fall of 15-20% and this should be considered an orderly descent,” said Adelaide Timbrell, senior economist at ANZ.

“Strengthening population growth driven by immigration, as well as favourable labour market conditions will be protective factors against a more rapid decrease in prices or a crash.”

Estimates for a peak-to-trough correction were in a wide 13%-28% range in the Nov. 9-24 Reuters poll, highlighting the uncertainty.

On a calendar year basis, the poll showed average home prices falling 7.3% this year and 9.0% in 2023. The estimate for next year was unchanged from a September poll.

While lower house prices would help improve affordability, it would be a bitter pill to swallow for recent homeowners, watching their capital decline and facing higher repayments as interest rates rise.

“It is crystal clear that the RBA is now focussed on developments in the housing market. And their tightening cycle from here will determine how much further home prices will fall,” said Gareth Aird, head of Australian economics at CBA.

AMP (OTC:), ANZ, Knight Frank and Macquarie said average house prices would have to fall between 25% and 45% to make Australian housing affordable.

Property prices in Sydney – the world’s second-most expensive housing market after Hong Kong – and Melbourne were forecast to fall 6.0-6.5% next year after declining 12.0% and 8.5% this year, respectively.

For other stories from the Reuters quarterly housing market polls: