As we head into March, it will soon be spring. A young man’s fancy lightly turns to love, while young and not so young investors’ thoughts turn more solemnly to taxes. This seems like an appropriate time to look at one corner of taxation – curiosities of ordinary income dividends distributed by funds.

I’ve been told that some people find taxes numbingly dull and perplexing. Who could imagine? Just to help you target your attention, I’ll break this essay into five parts.

The Basics: What Gets Taxed, When?

At first blush, ordinary income looks straightforward. Mutual funds are required by law to distribute 98% of the ordinary income they make (i.e., excluding capital gains – which are be taxed, but differently) or pay a penalty tax. Broadly speaking, that income is revenue less expenses.

Basic sources of revenue are interest from bonds (federal, municipal, corporate, etc.) and dividends (qualified and non-qualified) from stocks. Revenue can also come from a variety of other sources, such as fees for lending out securities to short-sellers.

We know that tax-exempt interest that a fund collects from municipal (muni) bonds is passed through as tax-exempt dividends to its shareholders. Also, that for state income tax purposes, only the fraction of the income that comes from in-state bonds (or bonds from U.S. territories including Puerto Rico, Guam, etc.) is state tax-exempt.

One needs to be alert here; a single state fund may not get 100% of its income from that state. Further, some states require a minimum percentage to be issued by the state, else none of the income is tax-exempt. For example, Minnesota doesn’t give you a break unless 95% or more of the income comes from Minnesota bonds.

If you invest through a brokerage, you may have to go to the fund family’s website to get the percentages for your funds. Fidelity, Vanguard, and T. Rowe Price all have good pages that provide this and other tax information about their funds, as do many other families. Some other families make it more difficult to find the information, but with some searching, the necessary figures can usually be found.

Similarly, interest derived from federal securities (e.g., Treasuries) is generally state tax exempt. As with muni funds, the exemption is limited to the fraction of the income derived from these securities. And as with muni funds, some states have a minimum threshold. California, Connecticut, and New York all require 50% of the portfolio to be invested in federal securities for any income to be treated as tax-exempt.

Some funds may meet the 50% threshold in some years but not others. Fidelity Government Money Market Fund (SPAXX) is one such fund. It met the threshold in 2018 but hasn’t since. Of note is that in 2021, 52.9% of the fund’s income came from government securities, but the fund still didn’t meet the 50% threshold. That is because the percentage pertains to the value of federal securities in the fund, not to how much interest those securities generate.

Taxes on Global and International Funds 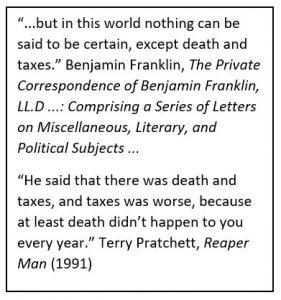 Matters get more interesting when looking at foreign taxes. Mutual funds that invest abroad often pay taxes to foreign governments. Most funds treat these taxes the same way as they would treat other operating expenses such as brokerage fees. They count the taxes among their expenses and reduce net income accordingly. In much the same way, multinationals subtract their foreign taxes from revenue in calculating their net profits. Just what one would expect.

If a fund makes $11/share in net income before subtracting a $1 in foreign taxes, it nets $10/share, which it distributes in cash to its shareholders. That’s pretty straightforward. But some international funds perform a bit of accounting legerdemain. Instead of subtracting that $1 from their income, they pretend that they made $11 in income which they distribute to you. They also pretend that you, not the fund, are the one who pays that $1 in foreign taxes. So they pay you that dollar with one hand and take it back with the other, at least on paper. Your bottom line is the same: you receive $10 in cash.

Yet this has very different tax implications. The fund doesn’t get to deduct that $1 from its profits. That’s why it has to distribute $11 to you on paper. You on the other hand get credit, figuratively and literally, for having paid that $1 in foreign taxes.

In order for the fund to execute this sleight of hand, it must meet a threshold requirement. It is reminiscent of the 50% threshold some states impose before taxpayers may exclude federal interest received from mutual funds. Funds must have over 50% of their assets invested in foreign corporations to do this creative bookkeeping. In addition, they must also choose to do this.

Many global funds do not meet this threshold. Generally, even those that do chose not to pass the foreign tax credit through to their investors. For example, Vanguard Global Capital Cycles (VGPMX) had 68% of its assets invested in non-US equity at the end of 2021 according to Morningstar. But it’s not in Vanguard’s list of funds providing a foreign tax credit.

On the other hand, Grandeur Peak global funds, pass through foreign tax credits to their shareholders if they meet the threshold requirement. These funds are the exception that proves the rule. Grandeur Peak global funds tend to hold over two-thirds of their assets in foreign stock. Global funds typically hold under half and so are ineligible to pass through credits. This is an argument for investing in foreign funds rather than global funds, at least in taxable accounts where it makes a difference in taxes.

If you do get credit for having paid foreign taxes (box 7 on form 1040-DIV), you have a choice whether to take a dollar-for-dollar credit or a deduction. Generally, the credit is better. Suppose your 1099 shows that you paid $4 in foreign taxes and you are in the 25% tax bracket. The choice is whether to subtract $4 from the taxes you owe or to take a $4 deduction that only reduces your taxes by $1 (25% x $4).

That seems simple enough, but nothing with taxes is simple. If you’re paying say 10% of your income in federal tax (e.g., your taxable income is $50,000 and your tax bill is $5,000), then your foreign tax credit is limited to 10% of the foreign income that you made, typically from your fund investments. For tax wonks, this is similar to the limitation on tax credits that your home state will give you for income taxes you pay to another state. The good news is that any excess can be carried forward for ten years, or back one year. So it is likely that you will be able to use the full credit eventually.

If for some reason you can’t or don’t want to take the credit, you are allowed to deduct the foreign tax instead. Unfortunately, that is treated as an itemized deduction which may not help if you are taking the standard deduction rather than itemizing.

All of this discussion about foreign tax credits and foreign tax deductions may make it appear as though you lose if you keep foreign funds in a tax-sheltered account (e.g., IRA, 401(k)). While it is true that you lose the opportunity for a credit, the effect is as though you get a deduction, so all is not lost. 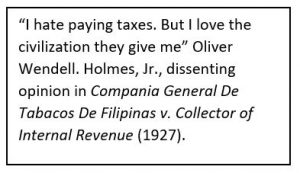 Go back to the example of a fund making $11/share and paying $1 in foreign taxes. In an IRA, you don’t care what the 1099-DIV says. All that matters in an IRA is the cold hard cash received. Your investment earned $10/share, and that’s the extent of your added tax liability. It’s the same as if you had received $11 on paper in a taxable account and taken a $1 deduction.

Tips for Managing Your Fund-Related Taxes

Though the machinations and tax rules may be complicated, dealing with them doesn’t have to be: