Since the number of funds we can cover in-depth is smaller than the number of funds worthy of in-depth coverage, we offer one or two managers each month the opportunity to make a 300-word pitch to you. That’s about the number of words a slightly manic elevator companion could share in a minute and a half. In each case, I’ve promised to offer a quick capsule of the fund and a link back to the fund’s site. Other than that, they’ve got 300 words and precisely as much of your time and attention as you’re willing to share. These aren’t endorsements; they’re opportunities to learn more.

You remember how often people have looked problem and said, “yep, we’re gonna have to get to that someday.”

That was driven home by the January 2022 collapse of the Frick Park Bridge in Pittsburgh. You may have seen the picture: 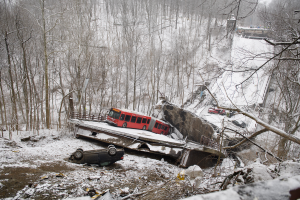 I am from Pittsburgh. Went to Pitt, but couldn’t afford a dorm room, so I lived at home and took the Port Authority’s 61B bus to school every day. Over that bridge. In that bus.

(Technically, a long-defunct predecessor of that bus which nonetheless is the 61B Braddock-Swissvale line.) As I looked at the images, I thought something like, “oh my God, that entire bridge just collapsed in the hollow. Jeezus.”

Welcome to infrastructure failures. Infrastructure is all of the stuff that connects other stuff and makes modern life possible: roads and railroads, water treatment plants and bridges, but also cell tower networks and data centers, airports, and solar farms. For the average citizen, it’s out of sight, which means, for the average politician, it’s out of mind. That’s shorthand for “not in the budget this year, but we’re going to have to get to that … someday.” The American Society of Civil Engineers estimates that the US needs about $2.6 trillion in investments just to catch up with deferred infrastructure maintenance. (Including, now, putting my bridge back.) Trillions more will be needed in next-gen infrastructure to deal with the effects of the climate crisis (Goldman Sachs estimates $16 trillion by 2030), from raising miles of rail lines above new floodplains to upgrading the 640,000 miles of 40- to 50-year-old high-voltage transmission lines ($500 billion), which will be necessary to carry the 1,600 gigawatts of power that might be generated by clean new solar and renewable energy farms (another $2 trillion-ish). The rollout of 5G networks alone will drive over $1 trillion in new investment over the next five years.

Much of that investment will be private, that is, made by corporations rather than governments. That raises an interesting investing opportunity, as well as providing a public good.

Given their essential nature, these assets often provide investors with stable and secure cash flows, downside protection, diversification from other asset classes, inflation protection, and long-term liability matching. By focusing on essential operating assets, an infrastructure strategy should be resilient in most economic environments. While we believe that infrastructure is compelling for investors across a variety of market conditions, today’s climate appears to be particularly rife with opportunity. (Infrastructure Investing: Why Now? July 2021)

The combination of downside protection (both from income and from the fact that they’re necessary investments to maintain essential services) and upside potential (because demand is soaring and there’s a big backlog of projects already) arguably place the infrastructure asset class in the midpoint between other classes: higher returns than bonds, lower volatility than stocks, potentially with a higher Sharpe ratio than either. 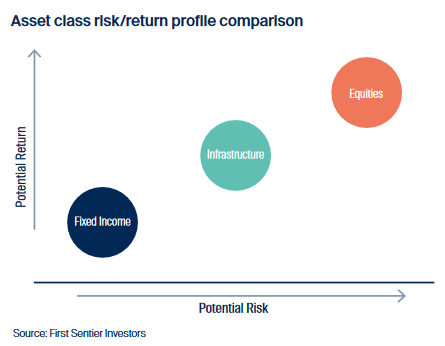 The Australian firm First Sentier Investors has launched the first fund dedicated exclusively to infrastructure investments in the United States. Since its inception (through 3/30/2022), a $10,000 opening investment would have grown by 32.9%. In the same period, the S&P 500 rose 23.5%, and the Morningstar global infrastructure peer group gained 17.8%. That’s a substantial lead, and it’s consistent with the performance of its older sibling, First Sentier’s Global Infrastructure strategy, which since inception, returned 6.4% annually against its benchmark’s 4.2%.

We had the opportunity to speak with one of the fund’s managers about their strategy and its potential role. 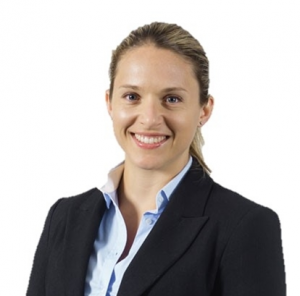 The version that headquarters prefers

Jessica Jouning is part of a 10-person team responsible for the American Listed Infrastructure Fund. My suspicion is that she’s… not like the rest of us. She had all of the credentials that one might hope for. Bachelor of Commerce (with Honors) from the University of Queensland. She joined First Sentier in 2010 and has rather more than ten years of experience as an investment analyst, including spending six months in the Global Equities team based in London, an internship at Macquarie Risk Management Group, and a long stint as a member of the Unlisted Infrastructure, Global Resources and Global Fixed Interest and Credit teams in Australia. 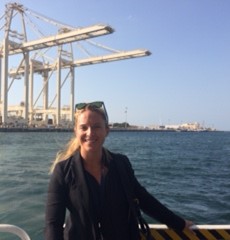 The version that shows her day job is way more interesting than mine.

She’s also an infrastructure nerd with responsibilities for railroads and waste disposal, having sort of graduated from covering data centers and ports. A native of New Zealand, she’s also been a commercial helicopter pilot and a scuba instructor and has sailed around the world three times. She is, she reports, “a naturally curious person” and a member of a team that “butts heads sometimes, optimists and pessimists working together to get good outcomes.”

Rather than guess about what Ms. Jouning is thinking, we posed the same question to her that we do to all managers: “before you launched FLIAX, we already had 40 global infrastructure funds on the market, some with a record of 15 or 20 years plus 140 others that focus more broadly on real estate. Why on earth do we need one more choice?” Here are Jessica’s 300 or so words explaining her team’s rationale.

Many people might think that because our fund is new, we’re new at investing in American listing infrastructure. That’s simply not correct. We launched our global listed infrastructure strategy over 15 years ago, and it now has over $10.5 billion in assets. We’ve got over a thousand people working at First Sentier Investors, and we’re responsible for $182 billion in assets.

Since the global infrastructure strategy’s inception, we have been tracking and investing in American listed infrastructure; half of the global fund is in US companies. When we launched the new fund for US investors, we didn’t take up coverage of any extra stocks; we simply focused more on the American investments.

We think American listed investments are special. Infrastructure assets commonly have defensive characteristics of high barriers to entry, strong pricing power, less cyclical, structural growth stories and predictable cash flows that foster stable income and total returns over time. The US is behind the rest of the world in infrastructure ranking. That’s the opportunity. There’s a lot of infrastructure spend that needs to happen in America, strong bipartisan support, and no government funding to support it. As a result, US companies are willing to invest in infrastructure.

We like the US because it is business friendly, has light-handed regulation, accounting transparency, a strong judicial system, rule of law, some of the best management teams and good corporate governance.

And we think we bring a global perspective on a US fund. We’re not just looking at American assets. We’re looking globally at US utilities, looking at global best practices. We travel the world meeting with these companies, forming a view on whether they are good investments. It comes down to trying to deliver performance for our clients, so we look for mispricing within the market. From an infrastructure point of view, most global listed infrastructure funds are based in Australia. We think our competitive advantage is stock picking. We’ve been doing this a long time. We have seen CEOs come and go. We meet the management and middle management teams. We meet with the regulators and form our own views. It’s very specialized.

This is a high barrier-to-entry space; physical assets can’t simply be replicated — networks of cell towers or rail lines, for example. And there are a lot of drivers, such as the need for de-carbonization, that will push growth further in the US.

First Sentier American Listed Infrastructure Fund (FLIAX) nominally has a $1,000,000 minimum initial investment. As a practical matter, the advisor may accept a retail-like initial investment, especially given their desire to build fund assets to a large enough level to warrant inclusion on platforms beyond Pershing. The greater inconvenience, for the nonce, is that you will need to invest directly through the adviser. The fund charges 0.75%. The First Sentier American Listed Infrastructure is reasonably rich with direct and linked information (and a cool picture). The Insights page offers an exceptional analysis of American listed infrastructure as an asset class (2021). For investors looking for a bigger picture, the advisor’s “Investing in Infrastructure” page broadens the discussion to global infrastructure and real estate investing, though without the level of detail in the America doc.

© Mutual Fund Observer, 2022. All rights reserved. The information here reflects publicly available information current at the time of publication. For reprint/e-rights contact us.

Ishbia gets NBA blessing to buy the Phoenix Suns