The funding, which came across two rounds, values the company at $1.3 billion 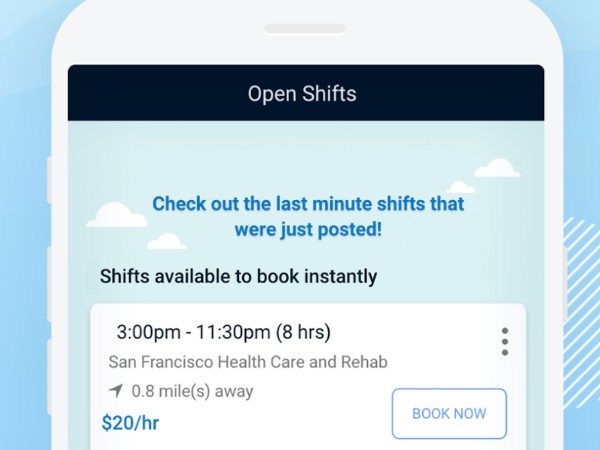 Around 20% of all 5,000 hospitals in the country are critically understaffed, according to HHS. While there’s no doubt of the pandemic made this worse, this is not a new problem. There have been warnings about shortages among doctors and nurses for a number of years.

Wei Deng, founding CEO of healthcare staffing company Clipboard Health, saw this problem when she immigrated to the U.S. from China.

“I started out wanting to lift people up the economic ladder. I’m an immigrant to this country from mainland China. My parents and I made that double journey, first coming here, and then building a life. So, making sure other people have more opportunities is important to me,” she said in an interview.

“I spoke to a lot of people working in healthcare – nurses and nursing assistants – about the problems they faced. What came up again and again was a lack of opportunity. They couldn’t see where they were needed. I slowly realized that what they were describing was a broken marketplace. They just couldn’t get good, up-to-date information.”

What Clipboard’s software does is allow healthcare professionals to get access to more opportunities by choosing when and where to work by showing them open shifts that healthcare facilities post on the app.

“We had been working on the problem for a few years before the pandemic started, and all of a sudden, the number of facilities struggling to fill shifts just exploded. But COVID wasn’t the real cause of these short-staffed facilities. So, even as COVID hospitalizations drop, we see an ongoing need,” said Deng.

The company’s solution has attracted a lot of attention, leading to major growth over the last 18 months, but also an influx of capital: the company has announced that it raised $80 million in funding at a $1.3 billion valuation.

The $80 million, which brings its total to $90 million, was raised over two rounds: a $30 million Series C round led by Sequoia Capital, which closed in February 2022; and a $50 million Series B round led by IVP, which closed last year. Other investors included Caffeinated Capital, Initialized Capital, Michael Seibel, managing director of Y Combinator’s early-stage program; Tony Xu, co-founder of DoorDash; and Emmett Shear, CEO of Twitch.

Clipboard is a two-sides marketplace, catering to both healthcare professionals and facilities. It works by having a scheduling coordinator at a healthcare facility post shifts that they need to fill on a calendar that the professionals can see. The nurses look at the time, location and pay being offered, and then they choose the shifts that are convenient for them.

“Clipboard Health is bringing together these two sides of the marketplace so that they can share information more easily. That’s how we’re fixing the marketplace,” said Deng.

Clipboard Health’s marketplace is currently used by tens of thousands of healthcare professionals, mostly nursing assistants, registered nurses (RNs), and licensed professional nurses (LPNs). For them, the ROI of using the app comes in the form of increased pay: for example, the company says that the average certified nursing assistant (CNA) on its platform earns $53,000, compared to $36,000 for a nurse not using Clipboard. This is because they can see other open shifts on the platform at facilities where they’ve never worked before.

“They might already have a full-time or a part-time job, and at the same time they might have time for another shift each week. They’re ready to put in extra hours, but they don’t know where they’re needed. Just getting visibility into more opportunities is the main way Clipboard Health makes a difference,” Deng explained.

On the healthcare facilities side, Clipboard is currently working with over one thousand of them, helping them fill the shifts they otherwise wouldn’t be able to.

“Healthcare facilities are under pressure to give patients good and sufficient care. In some states you have laws dictating how many caregivers they need to employ per patient or resident of the facility. Most US facilities are faced with a shortfall in the number of professionals they can get to fill shifts. It’s a dire situation for them and they’re looking for new ways to tackle the problem,” said Deng.

The platform simplifies the lives of scheduling coordinators by not locking them into months long contracts with high upfront fees, while also giving them access to more professionals  than they do through other partners they work with.

“They wouldn’t be posting open shifts with us if other solutions were meeting their needs,” she said. “We think it’s because of the marketplace aspect of our product: both sides get more information about each other, which makes it easier to find a match for a shift.”

Clipboard is growing quickly: its gross revenue increased by 25X over the last 18 months, and it plans to use that funding to build upon that, including hiring in all areas of its business. That means doubling the size of its engineering team, as well as growing its sales and marketing organizations. The company also plans to expand to new cities by the end of this year; it’s currently live in 30 markets, including Los Angeles, Philadelphia, Chicago and New York.

The ultimate goal, Deng explained, is to give more professionals access to opportunities that they otherwise wouldn’t get, and do it for as many people as possible.

“We think that fixing this part of healthcare is deeply important. Everyone needs healthcare. Lots of people fall through the cracks. If healthcare professionals see more opportunities through our app and get better information, then we’ve already taken a step toward fixing that,” she said.