It’s been that kind of year. Who would have guessed that I’d miss the quiet sanity of 2021? 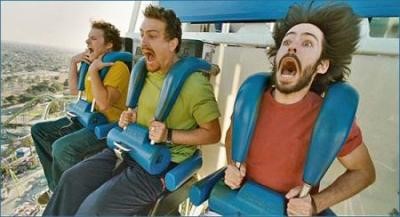 It has been a lot like that, hasn’t it?

It has been a lot like that, hasn’t it?

Here’s a snapshot of 2022 so far: 67% of NASDAQ and 30% of NYSE-listed stocks have suffered bear market declines (i.e., losses of more than 20%). Major indexes saw three-day swings of 10% or more – down 6% then up 8% in 72 hours. The VIX (hi, Devesh!) spiked by 50%. Inflation hit a 40-year high and oil hit $100 for the first time since 2014. Bitcoin, celebrated as “the new gold” because … well, actually I have no idea of what would cause people to think that, dropped 10% in value since January 1 but 50% since November. The case for gold is that its value is independent of the stock market and rises in value during times of turmoil; crypto is doing the opposite. Then, too, Vladimir Putin launched a war in Europe and the Voya Russia Fund (IIRFX) did this: 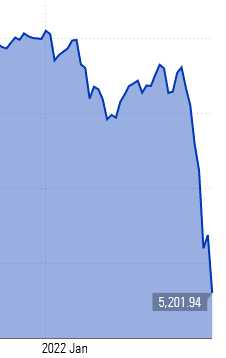 Some subset of investors used all of this volatility to justify their decision to double-down on their exposure to market risk. Reasoning that tech stocks surely couldn’t get any more beaten down (apparently these folks weren’t in the market in 2000) and the Fed surely wasn’t serious about rate increases given all the turmoil, they began repurchasing meme stocks and leveraged exposure to tech. The Wall Street Journal reported:

Individual and institutional investors jumped into the market. Of the $3.6 billion that investors poured into U.S. equity ETFs this week, around a fifth went to the ProShares UltraPro (TQQQ), which provides turbocharged exposure to the Nasdaq, FactSet data through Thursday show. (“Ukraine Crisis Upends Investing Playbook for 2022,” 2/27/2022)

My colleagues are probably more scarred and less blindly optimistic about how this all might play out. As you dive further into the issue, you’ll find:

Devesh Shah, the creator of the VIX, helps you understand how to survive drawdowns.

I offer an update of a 2021 article on the draw of a stock-light portfolio, looking at the risk and return profiles of Fidelity’s family of Asset Manager funds, through January 2022.

And The Shadow highlights industry news and developments – it’s starting to look like 25% of all mutual funds are thinking about becoming ETFs – that struck us as compelling.

Wars and rumors of wars

You will hear of wars and rumors of wars, but see to it that you are not alarmed. Such things must happen, but the end is still to come. Nation will rise against nation, and kingdom against kingdom. There will be famines and earthquakes in various places. All these are but the beginning of the birth pains. Matthew 24: 6-8

The Russian invasion of Ukraine might, in the long term, turn out to be a turning point. It might be the fatal miscalculation that unseats Vladimir Putin. It might unite Europe and revitalize NATO. It might shake American conservatives from their recent isolationism. It might move Sweden and Finland to increase military coordination with their European neighbors, encourage German leadership of the western alliance, or strengthen the hand of front-line countries facing Russia. It might cement a sense of national identity among the diverse ethnic groups in Ukraine. It might goof with your portfolio, or not. (Morningstar shared a list of bond funds with really substantial exposure to Russia.)

But in the short term, it is a vast human tragedy inflicted on small children, frightened parents, and worried elders. The United Nations reports 500,000 people made homeless in a week. Children, and children’s hospitals, have become collateral damage in Putin’s assault. These days will settle a weight on them that will never be fully lifted.

I was called upon, many years and rather too many wars ago, to read aloud part of Mark Twain’s “War Prayer” (1916). It was inspired, presumably, by a rising tide of support for US involvement in The Great War. A church filled with those about to go to war, and with their ebullient neighbors, confronts “an aged stranger [who] entered and moved with slow and noiseless step up the main aisle, his eyes fixed upon the minister, his long body clothed in a robe that reached to his feet, his head bare, his white hair descending in a frothy cataract to his shoulders.” He bore, he announced, a message “from Almighty God.” The message was that their pro-war prayers would be answered, as long as they affirmed the unspoken part of what their prayer entailed:

help us to wring the hearts of their unoffending widows with unavailing grief; help us to turn them out roofless with their little children to wander unfriended in the wastes of their desolated land in rags and hunger and thirst, sports of the sun flames in summer and the icy winds of winter, broken in spirit, worn with travail, imploring thee for the refuge of the grave and denied it—

For our sakes who adore Thee, Lord, blast their hopes, blight their lives, protract their bitter pilgrimage, make heavy their steps, water their way with their tears, stain the white snow with the blood of their wounded feet!

Twain’s passage ends, “It was believed afterward that the man was a lunatic because there was no sense in what he said.”

Those of us who have the luxury of worrying about how much it costs to fill our pick-ups and SUVs, or about the vicissitudes of the NFL off-season, should try to help lift as much of the weight from them as we can. 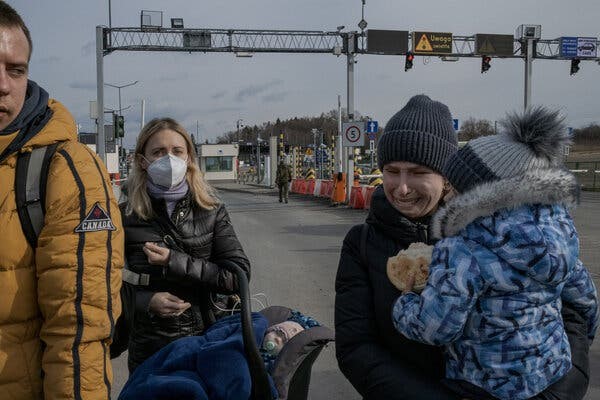 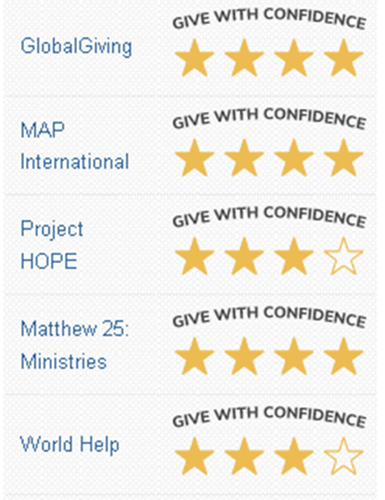 Please take a moment and give whatever assistance you can to the people of Ukraine. The UN Refugee Agency has helped rather more than 11 million displaced people over the years and accepts online donations. Charity Navigator highlights a handful of charities that strike them as responsible actors. I’m not sure who, among them, is “best.” My own conclusion was that giving money to good people right now is better than giving money to great people eventually. That led me to donate to the UN Refugee program and, through Charity Navigator, to Save the Children, Catholic Relief Services, and Global Giving’s Ukraine Crisis Relief fund.

It’s diversification, of a sort.

Meanwhile, other issues grind on

The magisterial IPCC Sixth Assessment report, released on February 28, 2022, provided the latest consensus on the “impacts, adaptation and vulnerability” of climate change. They concluded that “dangers of climate change are mounting so rapidly that they could soon overwhelm the ability of both nature and humanity to adapt” (“Climate Change Is Harming the Planet Faster Than We Can Adapt, U.N. Warns,” New York Times, 2/28/22).

As an investment matter, two questions arise. (1) Is it worth doing anything with my portfolio? And (2) if so, what?

Is it worth the effort?

The Wall Street Journal has a long-standing record of skepticism about sustainable investing. Their most sustained broadside came in a week-long series of articles by James Macintosh in January, decrying “the sustainable investment craze” (1/23/2022) and concluding “ESG investing can do good or can do well, but don’t expect both” (1/24/2022). Mr. Macintosh’s positions are that ESG funds are a marketing scam, they misdirect attention from essential political initiatives, and they necessarily sacrifice real investment gains in pursuit of illusory social goods. I’m particularly skeptical of articles where the conclusion predates the examination of the evidence, and this has been the Journal’s conclusion for a long time. The evidence appears to be more like, “well, yes, some funds are gimmicky and suck but that’s not an inherent characteristic of the group.”

Morningstar offered a clear and blessedly short response, Jon Hale’s “What The Wall Street Journal Missed About Sustainable Investing” (1/28/2022). Don Phillips, a managing director at Morningstar and former Alpha Dog, extends some of the arguments in “A Better Case for ESG” (2/11/2022). Here’s the synopsis: ESG investors, individual and professional alike, are neither stupid nor delusional. They know that this can only be a part of any effort to manage the effects of climate change, but it might well be an essential part because it supplies an essential and ongoing source of pressure on corporate decision-makers.

But where to invest?

There are at least two paths to consider. One is to invest in overtly ESG funds with a long performance record and clearly articulated discipline. A huge number of funds have only recently stapled the “ESG” designation to their operations, which often means the long-term records are meaningless and the quality of the ESG commitment is dubious.

In our April issue, we’ll use an interview with the managers of the First Sentier Investors American Listed Infrastructure Fund (FLIAX), a new institutional fund from a long-standing team, as a lens through which to look at the group.

“The team is still working on it”

Between December 1, 2021, and February 2022, 158 new open-end and exchange-traded funds were launched. Because of a perplexing glitch, Morningstar.com’s Premium Fund Screener says only 11 funds were launched in that period. We’ve been in conversation with Morningstar’s retail support and media teams, this year and last, who agree that it’s a problem. The status, as of February 28, 2022, is “the team is still working on the highlighted issue and we are yet to receive any update from them.” We’ll update you if the problem gets resolved.

The greater weakness is that the Morningstar screener, unlike the MFO Premium one, cannot simultaneously search mutual funds and ETFs. A separate ETF-only screener was fine in the days when ETFs were all passive funds and mostly insignificant ones, but the rising tide of fund-to-ETF conversions makes it clear that direct comparisons are essential. The good folks at Morningstar responded, most recently, “We have taken this as an enhancement and forwarded the same to the concerned team.”

Really, it’s not an optional change. The fund screener is nearly meaningless if its outputs aren’t integrated with the ETF screener. If you need that functionality and have $120, rather than a five-digit amount for a Morningstar Direct seat, I’d really recommend you look at the MFO Premium screener.

We note with sadness the passing of David W. James (1967-2022). Mr. James was the director of research at James Investment Research, a firm launched by his father Frank James, and a co-manager on all four of the James funds. Mr. James was engaged to be married and was, by all accounts, a good and loving person. His older brother, Barry, leads both the firm and the teams guiding the James funds. We wish them all peace.

Thanks to our faithful contributors this month: to the generous folks behind the Weeks Family Charitable Fund, Gardey Financial Advisors (welcome back, guys!), and the good folks at S&F Investment Advisors. And, most especially, to our subscribers: Gregory, William, Brian, David, William, Doug.

If you would like MFO to thrive in the year ahead, please support it … either financially or by reaching out to Devesh, Mark, Lynn, and Bill to let them know that you appreciate their dedication and are interested in their insights. You’d be surprised at how far a little encouragement goes!

On behalf of the folks at MFO,