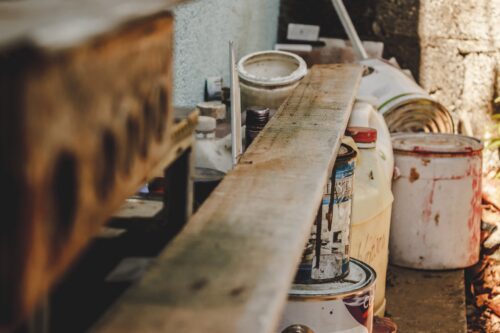 We came $60K under budget on our home purchase (WHEW!) but we bought a house that needed some work. We’ve decided to reinvest all $60K back into the house. When my husband does all of the labor, $60K equates to roughly double or more of what folks spend to contract out. That $60K, in theory, can stretch pretty far.

So how do we decide where to allocate our remodeling budget…especially since there is more than $60K of work needed?

Big Rocks First
Franklin Covey shared his story about prioritizing the most important things first. If you are one of the few people left on the planet who hasn’t been exposed to this, watch HERE

Safety is also a ‘big rock’ for me. My husband said he ‘thinks’ he can paint the 18’ ceilings in the living room. He does not have the proper equipment and this sounded like the least safe thing to do. The painter was $2,400. That’s cheaper than an ER bill so we hired a painter for the high ceiling areas only. The rest of the house we are painting.

The water heater is 20 years old. Yeah. 20. In case you didn’t know, they usually last 10-15. When you turn on the hot water, occasionally gray water comes out. Um, I don’t need to worry about the kids drinking that. My husband is replacing the water heater for $1,500. For those counting, we’re now down to $31K and we haven’t even done anything fun.

Every. Single. Wall. Needs to be painted. Remember how the colors of the home scared everyone away from buying it? Yeah. Now we have to cover those up. One of the rooms took FOUR coats of paint…and we buy good paint. I felt my soul die on that a little. But then I remembered what a good deal we got on the house and I’m more forgiving. Paint and supplies cost us $6K.

Perfect Pairings
This is the time we move to the fun stuff right? Nope. Sometimes it’s less expensive to do things now while something else is in process because it will save you money later. My husband wanted to replace some of the plumbing in the spare bathroom. A rush for right now? Nope. But will it eventually fail later? Absolutely. Unfortunately, the wall we need to cut into is the same wall the painters are scheduled to paint and they are letting us borrow their ladder. If we don’t do the repair now, even though it’s not a rush, we’ll have to bring the painters back out later and somehow figure out a way to get to that stupid wall.

Dreams and Wishes
Once all of the boring stuff is done, we get to the fun part. We hope to have just over $20K left and we’re focusing on dreams and wishes. We are renovating the master bathroom and painting the kitchen cabinets. We’re hoping to have some left over but understanding that renovations are like nailing Jell-O to a wall. We don’t get to even start the fun stuff until all the other big rocks and pairings are done which will be a couple months away.

I am SUPER grateful to be married to my contractor. I’m a lucky girl.

Tell me your renovation nightmares!

The post Renovation Tips appeared first on Blogging Away Debt.